Hi, welcome back for another tutorial. It's been quite a while since I put up a tutorial as I've been busy working on toolkits for the Marketplace. One of my earlier tutorials [link: Unit Selection Decals for RTS Games] had focused on how to create ring materials using textures, as well as using them to display unit selection decals for RTS games. However, a drawback associated with using textures was that it prevented the user from changing the inner & outer radius of the ring. And during prototyping stages of a product, it's far better to implement structures that can be changed easily from within the engine so that you don't have to create a new asset from an external package every time you need to test out a new idea. I've found this approach quite useful while working on my own products. Hence, this tutorial focuses on creating a ring material that can be adjusted both from within the material editor as well as dynamically at runtime.

Alright before we get started, I'm going to use the default Top Down Template that comes free with the Unreal Engine, as the top down view is a good example for showcasing the uses of a ring material. We're going to be creating a decal material here. So the first step is to create a new material from the content browser & adjust it's default properties from the detail panel. Under the 'Material' category of the details panel, set 'Material Domain' to 'Deferred Decal' & 'Decal Blend Node' to 'Emissive' as shown in the screenshot below. 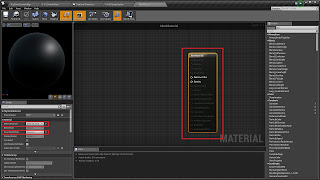 Now right click within the material editor & create two 'RadialGradientExponential' nodes. This node is normally used to produce radial gradients, but we're just going to use them to create two circles. The gradient effect can be negated by increasing the density of both these gradients. For that, just create a new constant expression & set it's value to 100. Connect it to the 'Density' input of both the gradient nodes. Now with that taken care of, we need to specify the outer & inner radius of the ring material. Create two scalar parameters 'OuterRadius' & 'InnerRadius' with the values 0.5 & 0.4 respectively. Connect these two to the 'Radius' input of the gradient nodes. Now subtract the inner radius gradient node from the outer radius gradient node & connect this to the 'Opacity' parameter of the material. 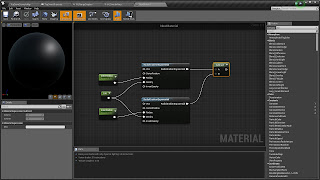 We have thus implemented the core logic for the ring material. Now on to the emissivity & opacity to wrap it up. First, create a vector parameter named 'BaseColor' & a scalar parameter named 'Emissivity' with the default value of 2. Multiple both of them & then multiply it's output with the result of the subtract node we added for the gradients. Connect the result to the 'Emissive' parameter of the material & we have created a circular ring material. 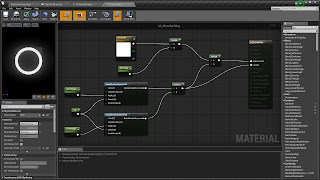 This next step is not necessary, but I created two material instances using this material: one for the unit selection decal & the other for displaying attack range.

Alright, now select the Top Down Character & add two 'Decal' components to it: a Unit Selection Decal & a Range Display Decal. Set the Z value of both to -98 cm & pitch value to -90 degrees. The pitch value is changed because the default orientation of the decal component spawns it in an invisible plane. Since the default dimensions are too small for our needs, we can scale up the Unit Selection & Range Display Decal to (1, 50, 50) & (1, 400, 400). As you may have noticed, we do not scale up the X value. This is because we don't want the decal to be drawn on surrounding objects. Setting it to one allows it to behave in such a way that it gets cut off by the obstacles in it's path instead of painting over them. 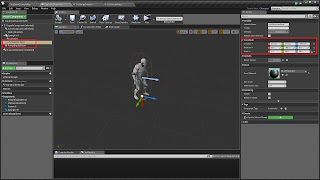 Now if you play in the editor, you should be able to see both the unit selection & range display decals display & move along with your character as shown in the screenshot below: 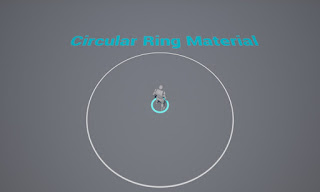 Alright, so that's it for this tutorial. I'll be continuing on with the Unreal Engine diaries series for concepts that do not require a whole tutorial. But I have some ideas for new tutorials as well & if possible, will try to upload them some time during this coming week. Until then, goodbye & have a great weekend. :)
Decals Range Display Ring Material RTS Top Down UE4 Unit Selection Unreal Engine 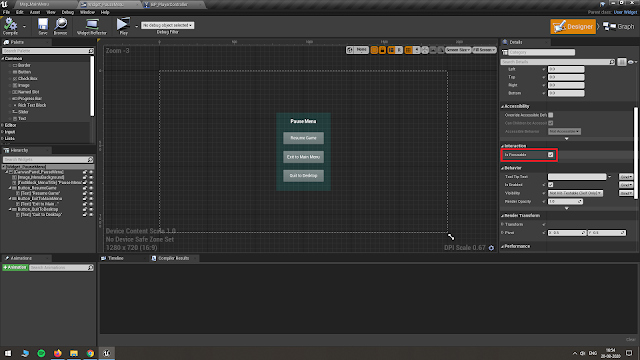 Unreal Engine Tips: How to use Keyboard Inputs when Input Mode is set to UI Only

I had recently migrated some of the HUD workflow from Prototype Menu System to Tower Defense Starter Kit. While going through the HUD blueprints, I noticed that the Input Mode was being set to Game and UI when activating the Pause Menu. Since I didn't want the player to have the option to interact with the game outside of the menu in this state, I went ahead and changed it to UI Only, only to find out that the Escape button could no longer be used to quit the Pause Menu (in spite of it being set to Execute when Paused). It turns out that setting the Input Mode to UI Only also prevents us from interacting with the UI using keyboard. At first, it seemed like I'd have to revert it back to Set Input Mode Game & UI. But further inspection led to a workaround to tackle the issue: Handling the keyboard input directly through the widget itself instead of the player controller.   The first step is to ensure that the widget can be focused. We can do this by setting its IsFocusable 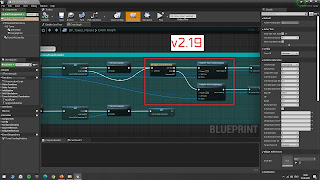 Adding components to an actor at runtime has always been kind of messy if you've been using blueprints in Unreal Engine. There was never a generic function like "Spawn Actor from Class" where you could just happily plug in the required class and be done with it. Instead when it came to components, we always had to specifically add each type of component by name. For example, given below is a scenario where I'm adding a couple of components to provide an actor with Damage Buff and HP Regen abilities: As you can see from the screenshot, I'm using an enum to first determine which component has to be added, and then adding the associated component on a case by case basis. This might not seem like an issue here given that we have only two of these, but it feels like redundant busywork once we start dealing with a dozen or more of these components. The UE4 blueprint community has been asking for a generic class based component spawning system for quite some time. And fi

The Widget Component in Unreal Engine provides the option of rendering widgets that are attached to an actor in the level. Unlike widgets that are directly drawn on the Player HUD, the widget component can render widgets both on screen space as well as the world space, and can thus be used to create spatial/diegetic UI systems ( like in Dead Space ). Adding a widget component to your actor follows the same process as adding any other component. But once added, it also requires us to set a widget class so that it knows what widget to render. And this is specified through its Widget Class parameter. Now while the above solution is ideal for specifying a widget in the editor, it doesn't provide us with any means to change the widget at runtime. Fortunately, the widget component has a BP function specifically for this purpose: the Set Widget node. However, using this Set Widget node is not as straightforward as setting the Widget Class method mentioned earlier. When we specify the w